Here the kinds of doc i want to write

Use a productive notebook interface to weave together narrative text and code to produce elegantly formatted output.

Over the years, we’ve seen many different terms used to describe software like CKAN and the solutions it is used to create e.g. data catalog, data portal, data management system, data platform etc.

Over time, personally, I’ve converged towards data management system (DMS) and data portal. But I’ve still got two terms and even people in my own team ask me to clarify what the difference is. Recently it became clear to me:

A data management system (DMS) is a tool. A data portal is a solution.

Had this conceptual diagram hanging round for a couple of years.

tl;dr: composition is better than inheritance but many systems are built with inheritance

You can write templates two ways:

NB: To understand what a project is see DMS.

It helps me to be very concreate and imagine what this looks looks like on disk:

Or, a bit more elegantly:

I’ve used the term Data Factory but it’s not in common use. At the same time, there doesn’t seem to be a good term out there in common use for what I’m referring to.

What am I referring to?

I can start with terms we do have decent-ish terminlogy for: data pipelines or data flows.

Idea is reasonably simple: I’m doing stuff to some data and it involves a series of processing steps which I want to run in order. It may get more complex: rather than a linear sequence of tasks I may have branching and/or parallelization.

Because data “flows” through these steps from one end to the otehr we end up with terminology like “flow” or “pipeline”.

Broken down into its components we have two things:

But what is the name for a system (like AirFlow, Luigi) for creating, managing and running data pipelines?

My answer: a Data Factory.

What I don’t like with this is that it messes with the metaphor: factories are different from pipelines. If we went with Data Factory then we should talk about “assembly lines” rather than “pipelines” and “workers” (?) rather than tasks. If one stuck with water we’d end up with something like a Data Plant but that sounds weird.

Analogy: for data we clearly have a file and dataset. And a system for organizing and managing datasets is a data catalog or data management system. So what’s the name for the system for processing datasets …

And finally 🏁 I should mention AirCan (opens new window), our own Data Factory system we’ve been developing built on AirFlow.

Harvesting and data loading (for data API) are almost identical as mechanisms. As such, they can share the same “data factory” system.

# package.json and npm were a mistake

ASIDE: It’s the core tool (node) that make a metadata format and packager relevant and successful. It’s node require allowing using of package.json or bundling npm in by defaultonly 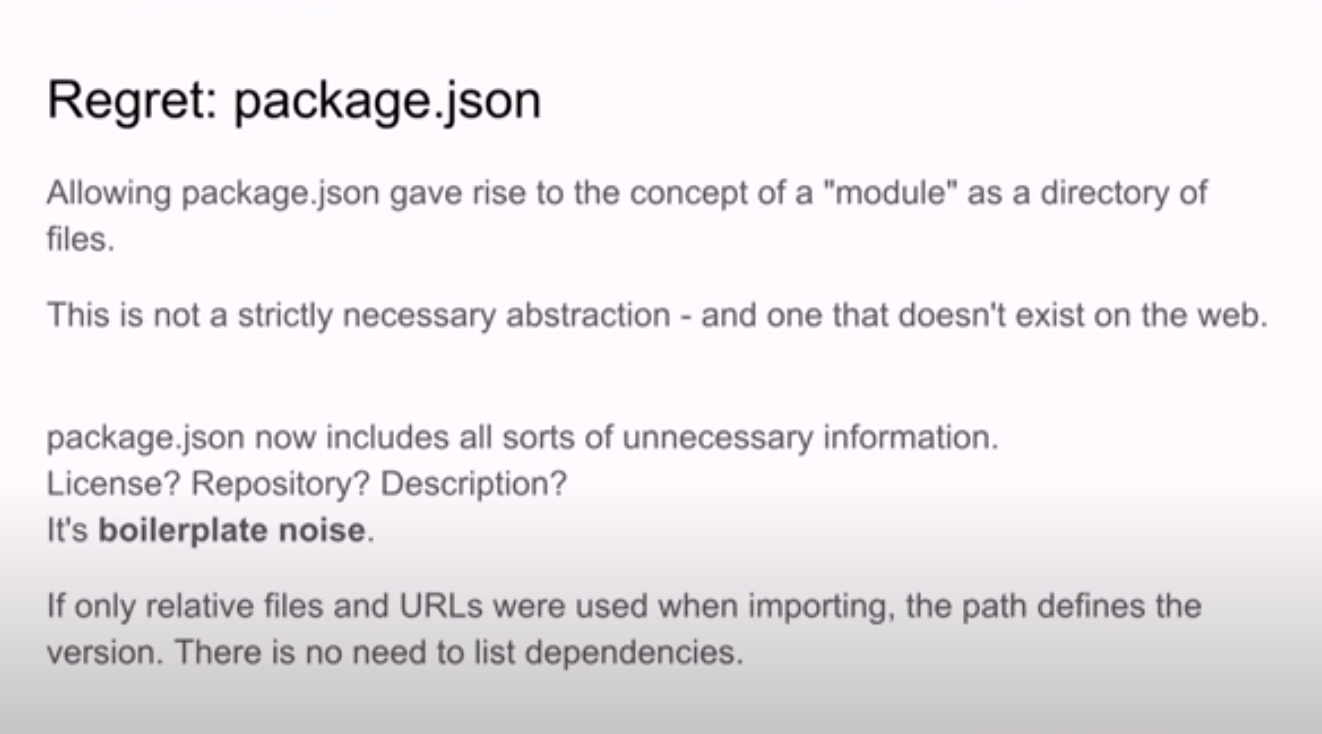 # Vendoring by default with node_modules was a mistake

Generally Go does stuff well. They also punted on dependency management initially. First, you just installed a url it was up to you to manage your depedencies. Then there was a period of chaos as several package/dependency managers fought it out (GoDeps etc). Then, ~ 2018 the community came together led by Russ Cox and came up with a very solid proposal which is official as of 2019.

Go’s approach to module (package) and dependency management can be an inspiration for Frictionless and Data Packages. Just as we learnt and borrowed a lot from Python and Node so we can learn and borrow from Go.

These are the three principles of versioning in Go, the reasons that the design of Go modules deviates from the design of Dep, Cargo, Bundler, and others.

Layout on disk in a module (see e.g. https://blog.golang.org/publishing-go-modules (opens new window)). Main file go.mod and one extra for storing hashes for verification (it’s not a lock file)

#### Vendoring is an incomplete solution to package versioning problem

More fundamentally, vendoring is an incomplete solution to the package versioning problem. It only provides reproducible builds. It does nothing to help understand package versions and decide which version of a package to use. Package managers like glide and dep add the concept of versioning onto Go builds implicitly, without direct toolchain support, by setting up the vendor directory a certain way. As a result, the many tools in the Go ecosystem cannot be made properly aware of versions. It’s clear that Go needs direct toolchain support for package versions. https://research.swtch.com/vgo-intro (opens new window)

Ruthlessly retain compatibility after v1 - inspiration from Go for Frictionless

It is intended that programs written to the Go 1 specification will continue to compile and run correctly, unchanged, over the lifetime of that specification. Go programs that work today should continue to work even as future “point” releases of Go 1 arise (Go 1.1, Go 1.2, etc.).

And they go further – not just Go but also Go packages:

Packages intended for public use should try to maintain backwards compatibility as they evolve. The Go 1 compatibility guidelines are a good reference here: don’t remove exported names, encourage tagged composite literals, and so on. If different functionality is required, add a new name instead of changing an old one. If a complete break is required, create a new package with a new import path.

Project should be the primary object in a DataHub/Data Portal – not Dataset.

Why? Because actually this is more than a Dataset. For example, it includes issues or workflows. A project is a good name for this that is both generic and specific.

cf Git-hub e.g. Gitlab (and Github). Gitlab came later and did this right: it’s primary object is a Project which hasA Repository. Github still insits on calling them repositories (see primary menu item which is “Create a new repository”). This is weird, a github “repository” isn’t actually a github repository: it has issues, stats, workflows and even a discussion board now. Calling it a project is the accurate description and the repository label is a historical artifact when that was all it was. I sometimes create “repos” on Github just to have an issue tracker. Gitlab understands this and actually allows me to have projects without any associated repository.

TODO: take a screenshot to illustrate Gitlab and Github.

4 Stores of a DataHub

Naming is one of the most important things – and hardest!

In CKAN v3: propose to separate these explicitly …

Data Portal vs DataHub vs Data OS – naming and definitions.

Is a Data Portal a DataHub? Is a DataHub a DataOS? If not, what are the differences?

What’s crucial about a table is that it is not just an array of arrays or a rowset but a rowset plus a fieldset.

A Table is a FieldSet x RowSet (+ other information)

There is the question of whether there is some kind of connection or commonality at each dimension up … e.g. you could have an array of arrays where each array has different fields …

But a table has common fields.

(NB: one could always force a group of rows with disparate fields into being a table by creating the union of all the fields but that’s hacky)

So a table is a RowSet plus a FieldSet where each row conforms to that FieldSet.

NEXT: moving to flows / processes.

Is there room / need for a simple dataflow library …?

What kind of library?